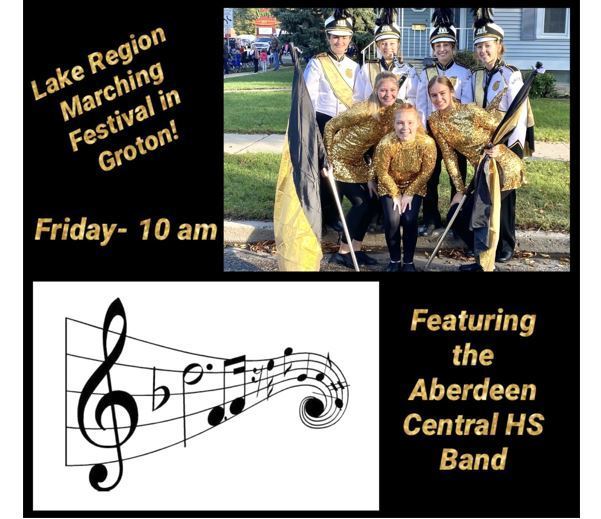 Lake Region Marching Band Festival to be held in Groton

On Friday, October 8th twelve area school bands and the Aberdeen Central High School Golden Eagle Marching Band will converge in Groton for the annual Lake Region Marching Band Festival.  The parade of bands will travel from South to North on Groton’s Main Street from Railroad Avenue to 9th Avenue, beginning at 10:00 a.m.  Following the parade, the Aberdeen Central High School Band will present a “Phantom of the Opera” field marching show for all bands in attendance.

The festival has become a premier marching event in Northeast South Dakota, attracting bands and spectators from towns across the region.  The public is invited to watch the parade of bands on Main Street as well as Aberdeen Central’s field marching show and awards at the football field. The festival will be livestreamed at gdilive.com free of charge. Concessions will be available at the football field following the parade.

Primary sponsors of the festival are Groton Dairy Queen and the Groton Daily Independent.